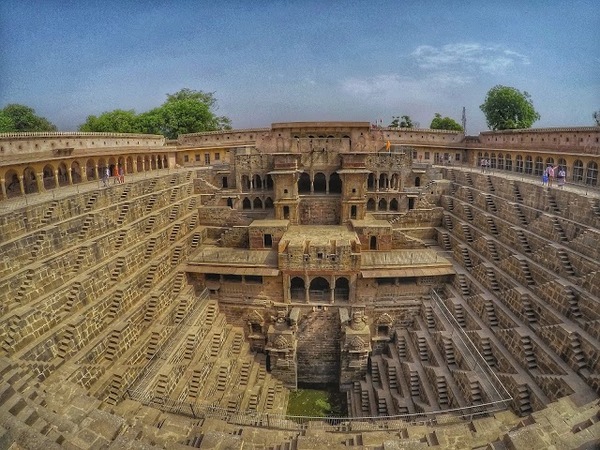 Abhaneri is a small village of the Dausa district in northern Rajasthan; it is located 95km from Jaipur, towards the Jaipur-Agra highway. The present name of the village, 'Abhaneri', is believed to be a mispronunciation of 'Abha Nagri' or the 'city of brightness'. This ancient village in Rajasthan is renowned for its post-Gupta or early medieval monuments, Chand Baori and Harshat Mata temple. Though the village is in ruins now, tourists throng the village to see Chand Baori which is a huge step well, a unique idea conceived by the natives to work as a water reservoir. Another attraction is the Harshat Mata temple, an architectural jewel on the tourism map of Rajasthan.

As per records, this village was established in 9th century A.D by King Raja Chand of Gurjar kingdom. The initial name of Abhaneri was 'Abha Nagri' or the 'city of brightness' which led to its present name, 'Abhaneri'. Legend has it that Goddess Harshat Mata, in a joyous mood, spread brightness all over the village and hence, the name.

What makes Abhaneri a place to visit is the presence of Harshat Mata temple and Chand Baori. Harshat Mata temple, which dates back to 10th century, is protected by the archeological department of the Government of India. Though the temple is in ruins, its beautiful craftsmanship is still visible. Harshat Mata is regarded as the goddess of happiness who spreads joy to the entire village. Visiting the temple is worth the while, thanks to its amazing architecture which takes us back to the glory of medieval India. The ruined images in the temple indicate that the temple was actually dedicated to Lord Vishnu.

The Chand Baori is a step well which is regarded as a unique invention of the people of Abhaneri; it was created for rainwater harvesting. Located in the front of the Harshat Mata temple, this colossal step well has a depth of 20 meters, with 13 levels. Chand Baori is regarded as one of deepest and largest step wells in India. Despite being so huge, the well still has delicate and intricate carvings which are a visual treat. Various structures are also built around the step well.

The best time to visit Abhaneri is in the months of October to March.

Even with limited attractions, Abhaneri, a small rustic village in Northern Rajasthan, lures a large number of tourists. Close proximity to Jaipur indeed enhances its value on the tourism map.