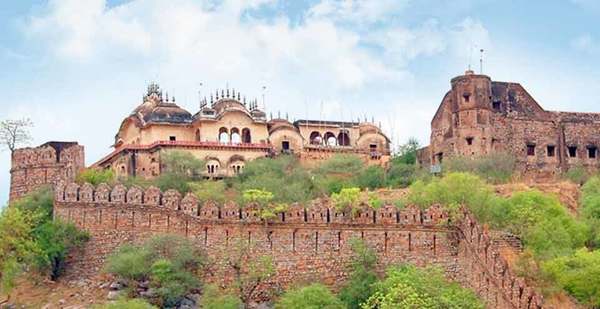 Bala Quila Fort or the Alwar Fort is situated in the Aravalli Ranges, above the town of Alwar. Built in 15th century by Hasan Khan Mewati, it has been under the rule of the Marathas, Yadavas, and the Kachwaha Rajputs. 'Bala Quila' means Young Fort. Laxman Pole is the only metalled road which connects the Fort to the Alwar city. The silver pages of history speak that Pratap Singh, the founder of Alwar state, entered the Fort through this metalled way only.In 1775 A.D. Kachhwaha Rajput Pratap Singh captured the fort and laid the stones of Alwar city. With a distance of 595 m, the massive fort is visible from the city itself. It gives a majestic view of the town as it is perched on a 300m high cliff. It spreads over an area of 5 km from North to South and 1.6 km from East to West. The forts have six gates which are Jai Pol, Suraj Pol, Laxman Pol, Chand Pol, Krishen Pol and Andheri Gate. The walls are finely crafted with ancient scriptures and sculptures.